I Am Back – Gurkhas (RMA) And More Photos

Well, the last two months have been a right pain.  Nothing has worked and I am sick of technology but as it is part and parcel of everyday life here I am again, using it.

When I last posted here I had no idea I would take such a while to come back and say hello again.  But life is never predictable I find and so this and that got in the way, plus the Internet has been giving me a nervous breakdown – or lack of it I should say.  Anyway, I am back.

It has been a wet and miserable summer so far, more like Singapore and Mumbai than England.  Rain stopped play for more than just my writing (only for a while), and getting around, but I am now getting to grips with a lack of webbed feet and a boat, and have decided to carry on getting soaked to the skin every time I venture outside and just accept it as part of life’s rich tapestry….not!

I posted a photo of the RMA (Sandhurst) earlier which I took last year during Heritage Day there.  I am going to add a few more to show you how lovely it is and because I couldn’t attend this year’s event due to other commitments.  Besides, had I gone this year I would have been totally soaked and unable to take any I expect.

Not only is the RMA open one day per year to the Public – it having been closed since the days when Princess Anne and her former husband, Captain Mark Phillips lived there in the 1970’s – for security reasons, it does open now and again for other special events such as the wonderful outdoor concerts named ‘Music on Fire’ – sadly there has not been one for a few years due to the numbers of Officer Cadets required to help run it and the various overseas commitments our Army has at the moment

Until Princess Anne came to live there, the grounds were always open to the Public who used it as a short cut to Camberley, or for picnics and generally used it like a park.

This year is the 200th anniversary of the RMA at Sandhurst and to celebrate, the RMA held a Freedom March through the town (which was, when I was small and a teenager, just a small village), the College having been given the Freedom of the Town some years ago to mark the close relationship between the village/town and the College which was a huge employer in the area for many years.

My own family has had links with the RMA going back almost 100 years – with family employed on the staff there, and also as Instructors to the Officer Cadets, and in the last thirty years, with family members attending as Officer Cadets.  Hence my interest.

The photo I posted earlier was taken last year and is of the Old College – the original College there – and it is where you often see the Commandant go up the steps on his white horse during Passing Out ceremonies.  This photo was taken on Heritage Day and you can see some of the free events put on for the public.

There are two lakes in the grounds which I love.

Above is the Lower lake.

Below is the second lake.

The RMA has a lot of Gurkhas stationed there and they hold demonstrations of traditional dances and fighting during these Public events and they also have a Gurkha village set up in the depths of the woods where they demonstrate survival techniques for living in the jungle.  I went on the Survival Trail.  There is also Gurkha food available which is so delicious….if you ever get the chance do try some. 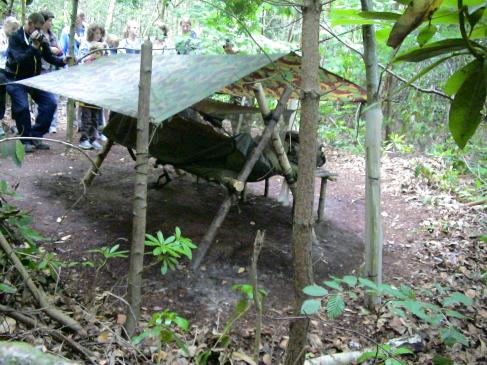 This is a shelter built to keep the soldier dry and away from reptiles and other creepy crawlies.

Above:  First trap a wild pig and then using this gadget, dispatch it ready for dinner.

Above:  The New College, RMA

I hope you enjoy these photos.  I enjoyed taking them.

During my time away from here I have been writing more short stories and also working on my novel, Ms Birdsong Investigates, which has been taking up a lot of thinking time.  I am about to tie up the whole investigation and so it is necessary to make sure I have all my suspects and motivations clear and understandable – you have no idea how confusing it can be trying to get all the clues in place, making sure the crimes can actually be committed in the right place at the right time and that the suspects are actually capable of committing them.  I have been driving myself mad getting it all to click.  So wandering around the countryside and taking photos has not been a waste of time – I do this to help me plot and think.

If you visit my author page on Facebook (http://www.facebook.com/JaneRisdon2) you will see that I have posted some photographs of places and houses and other things which have inspired a character, their home or a location in my work…there is the cottage where Ms Birdsong lives, where one of the characters lives and the view she has from her window and so forth….these help me keep a visual note of my plot and characters.  Do pop across and have a look and leave me a message…..I hope that you will LIKE my page there and become a frequent visitor.

Well, I will leave you now until next time – sooner rather than later I promise – and I hope you  enjoy the photos I have taken and that you will visit me on Facebook.  I look forward to catching you there soon. Do pop back here again and ‘Follow’ me to keep up with how my writing is going and what else I have been up to.  I love to receive your comments so do please leave me some. 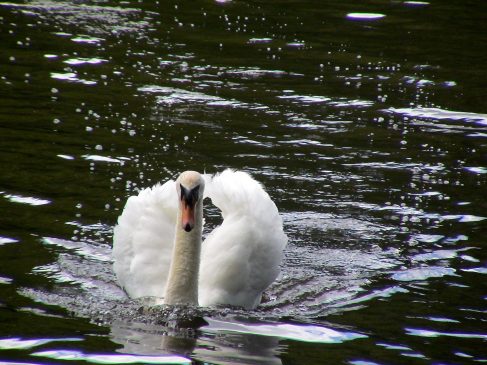 Above:  One of the swans on the lake at the RMA Sandhurst which took to me and followed me along the lake’s edge…