A little jolly back in the summer: Audley End House. Looking back on a fab Jolly.

17th Century and one of the finest examples of a Jacobean Manor house in the country.

Set in 6,000 acres of land with gardens designed by Capability Brown.

The grounds are now 1/3rd their original size and the property has been run English Heritage since 1984.

There are over 100 rooms in the house owned by Lord Braybrooke – the 10th Baron – whose family the title was created in 1788.

The Last Night of the Proms

which I was fortunate enough to have attended with family…no, they’re not featured in any photos.

One glimpse of my camera and they all run a mile!

Gates opened late afternoon and people began to arrive with their seats, picnics and even small tents complete with candlesticks and silverware.

They tended to remain at the rear of the event where they could make a fast get-away at the end.

As I like to sit near the off-stage mixing desk at such events, between the huge PA’s where the sound is (one hopes) the best, we found ourselves sitting in the centre of the lawns.

Looking over the pictured couple but with a good view.

Unfortunately the house was somewhat obscured by the stage and it wasn’t the sunniest of days, so many photos turned out to be far too dark to post. 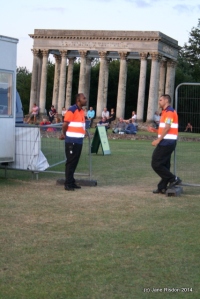 Others who hadn’t purchased tickets to come inside the event, sat outside and got  free show.

The event was opened with a fly past of a WW2 Spitfire owned and flown by Caroline Grace.

Her Spitfire flew out of the sun and over the heads of the audience, looping the loop, diving, and tumbling through the air, 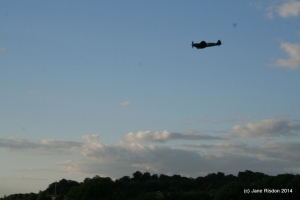 to the soundtrack of the Dambuster’s (movie) played by The National Symphony Orchestra. 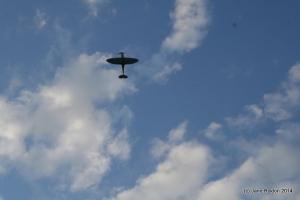 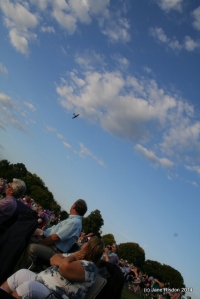 She spent a good ten minutes flying over head before she flew off into the sunset.

The speed of the plane and the way it tumbled and span around made it difficult to photograph – I did my best.

Later she was available for a chat about her plane and further flying events in one of the many tents on site which included the usual food and beer outlets.

We never managed to get over to her as the queues were so long and the concert was about to begin.

The concert began with the setting sun and lasted until about 10pm. 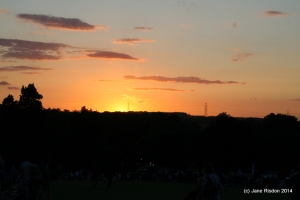 We enjoyed performances by: 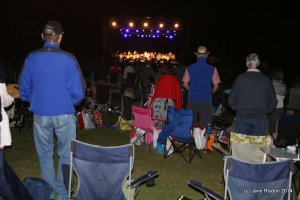 Later everyone sang Rule Britannia, Land of Hope and Glory and of course, Jerusalem

followed by a wonderful firework display to music, with all the usual flag waving.

I must admit the highlight for me was the Spitfire, but the whole event was magical and I think I enjoyed it more than The Last Night of the Proms in Hyde Park last year.

My family thought the same.  We had a wonderful time with great music and a terrific atmosphere, lots of great food – prepared for us – with plenty of lovely wine too.

The taxi back arrived on time and we spent the night in a cute little Inn not too far away.  A wonderful weekend all round.

As ever all my photos are (c) Jane Risdon 2014: All rights reserved.

‘We were just wondering,’ the blonde nurse said, ‘if you were in a rock group or something…’