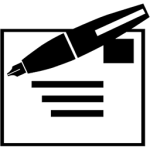 The Letter by Jane Risdon 2013

Haunted by the neat sloping writing on the blue Basildon Bond paper which lay accusingly on her writing desk,

the old woman sat locked inside her thoughts.

She couldn’t bear to pick the letter up to read it again, but there was no need really.

The contents were not unexpected after-all.

She’d been waiting nearly forty years for something like this to happen.

And now it had.

Every knock at the door, every strange hand’s address on an envelope had filled her with such fear,

She had never told.

The only reason she had an answering machine on her phone was so that she could screen her calls.

Now, there on the desk along with all her bills and other correspondence, the letter lay,

the words terrorising her silently across the darkening room.

She didn’t ask herself how or why.

She knew the answers and had known this moment would come eventually, either in the form of a visit,

a phone call, or a letter.

Forty birthdays had come and gone, and with each passing one she had agitated in case this time it would be the one;

the day when she would have to face her past.

There was nothing she could have done even if she had wanted to,

and she wasn’t even sure any longer if she had ever wanted to do anything.

At first it was not a matter of choice but necessity, but there had come a time,

many years later when she supposed she could have, possibly should have, tried.

Soon it would be over.

Of course she could ignore the letter but that might force a visit, in person, without warning.

She could pretend it had never arrived and feign ignorance if anyone queried its receipt.

Her stricken mind tried to battle with her emotions.

Part of her needed this to happen, craved it, and dreaded it, fought against it and longed for it.

Her tired faded eyes moved across the room to stare at the blue ghost beckoning her.

A date and a time had been suggested and if she didn’t respond the writer would understand,

after all it must be an awful shock after so many years, but hoped that she would consent to a meeting,

without strings of course.

Without strings, the old woman mused.

There were always strings, and there would always be strings.

She sighed heavily, tears brimming as she stood and made her way over to the letter.

She picked it up, reached for the telephone and dialled.

I hope you enjoyed this story.  Do let me know.  Feedback is always valued and appreciated