Today my Guest Author is

Back in February I was honoured to be a guest on her blog and so today I am returning the favour.

Anna is going to tell us something about

A Day in the Life of

Anna, who is DI Marsh and where can we find her?

DI Gillian Marsh is the troubled heroine of my crime series, 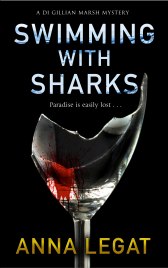 The series includes Swimming with Sharks, 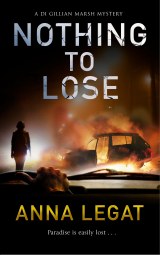 Nothing to Lose by Anna Legat

Thicker than Blood by Anna Legat

and a few more titles yet to be confirmed.

Let’s drop in on Gillian and see what she is up to:

DI Gillian Marsh begins her day foraging in her fridge for scraps of food. She is hungry – always hungry, which comes as no surprise as her fridge is habitually empty. She doesn’t have the time or the inclination to replenish it.

Grocery shopping is the last thing on her list (if there is a list). She’ll eat anything that will pop into her mouth, she isn’t fussy. Fritz, her cat, is. He only consumes freshwater fish, such as trout or salmon, straight out of a sachet.

Right now, as Gillian inspects a mouldy piece of Edam, Fritz is yodelling at her feet, demanding instant gratification. First come – first served, and he was the first one to cross the kitchen threshold.

Considering Gillian’s appetite, her frame is surprisingly tiny. She metabolises food faster than you can say instant coffee. She feeds Fritz, and begins to strip mould off that piece of Edam. Two pieces of toast jump out of the toaster, and another two go in. Gillian doesn’t sit down at the table to eat.

She eats on the move, a chunk of Edam in one hand, a piece of toast in the other. Her dressing gown has slid off her left shoulder and parted along her left breast, revealing her naked body, toned and alert, and totally unresponsive to the basic demands of modesty.

Anyway, Gillian has lost her dressing gown belt. Corky might’ve chewed it, or she might’ve strung it in the garden to hang her wet laundry on (the washing line broke ages ago and there’s no man in the house to repair it). Gillian doesn’t really care to remember such trivial matters – her mind is constantly occupied with the case at hand.

She is always thinking, and as we already discovered, she is always eating – Gillian is a master multitasker.

And a set of parents.

She forgets these things, and there’s no one to remind her. Gillian is a loner. People tend to get on her nerves (and on various other parts of her anatomy). Especially people in authority, like DSI Scarfe – Scarface.

If only he’d just concentrate on playing golf and attending garden parties and let Gillian get on with her job!

Six toasts and a black coffee with three sugars later, Gillian heads for the shower. She likes standing in the shower until the water runs cold, thinking. She is inventorising evidence from her current murder investigation.

Inventorising is Gillian’s own linguistic invention, a cross between revising and inventorying, the mental equivalent of a hamster in a wheel.

Gillian is churning facts in her head, facts and suppositions, scenarios.

She doesn’t hear when the phone rings downstairs and Tara (her daughter) leaves a message that she won’t, after all, be on the 4 o’clock train – she’s off to meet Charlie’s parents.

Not that the message would make any difference to Gillian’s timetable (we know already she remembers nothing about collecting her daughter from the train station later today).

There is no time for thorough drying. The towel is wet anyway – Corky had dragged it to the bathroom floor and slept on it (he doesn’t have any fixed abode). Putting a tight pair of jeans on your body is a tricky proposition – Gillian performs one-legged manoeuvers on the landing while, at the same time, attempting to negotiate the stairs.

She succeeds; did I mention that she was a master multitasker?

She arrives at work on a Sunday, which is all the same to her. Says hi to DS Webber, who is there for reasons of his own. He wants to know what happened to her hair. ‘I washed it,’ she tells him, and shrugs. It probably stands on end resembling an electric orgasm only her hair can achieve.

But her hair is an incidental and, as we might guess, she has missed all of her hairdresser’s appointments and doesn’t even know that her hairdresser has given her the sack.

What she doesn’t know, won’t hurt her.

Gillian and Webber determine to interview their prime suspect in a particularly gruesome botched exorcism case – Father Dreyfus. To their surprise, they find Dreyfus in the middle of Sunday mass (is it really Sunday?).

Gillian wants to interrupt the proceedings but Webber tells her to wait, so they sit through the liturgy until at last Gillian remembers the Sunday roast at her parents’.

Anna, if Gillian could get you to alter some part of her personality, if you were writing her from scratch, what (if anything) would it be do you think?

I’ve been wondering about that one aspect of Gillian’s personality she would ask me to alter, given a chance, and I think it would be her disregard for incidentals.

Deep down, I think, she’d love to remember them all because otherwise she will have to live in constant fear of waking up one day and not remembering her own name.

In that respect she does take after me, her creator.

Oh dear, that could be embarrassing.

Do give us the blurb on your new book Swimming with Sharks:

Swimming with Sharks is the first volume in the series.

When forty-something Nicola Eagles goes on the holiday of a lifetime to the Maldives, she never dreams she’ll fall in love – she’s too shy, too set in her ways. But then she meets someone who changes her life for ever…

Just when things seem to be going right for Nicola, though, she disappears without a trace.

Was it a voluntary disappearance, or was she abducted – or murdered? When her absence is noted back in the UK, DI Gillian Marsh is sent to investigate.

Gillian is a good detective but her life is dysfunctional to say the least – and as she delves deeper into the case, she realises that she may be out of her depth professionally too.

For Nicola’s disappearance is just the start… 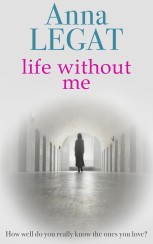 Life without Me by Anna Legat

If you’d like to find out more about Anna and her detective, DI Gillian Marsh you’ll find them by following these links.

We both hope you enjoyed A Day in the Life of DI Gillian Marsh and that you’ll leave Anna some comments here. I am sure she’ll really enjoy finding out what you think.

Thanks so much Anna, it’s been fun.