A little break from writing-related posts:

Here is the fourth post about the most recent of what I call my ‘jollies.’

Following on from our really interesting and enjoyable visits to Westminster Abbey, Westminster Cathedral

we stopped off in the village of Greensted, and had a look around what is known as

The oldest wooden Church in the World and the oldest ‘Stave Built’ timber building, still standing, in Europe:

The church represents 1,300 years of English History and Christian worship. 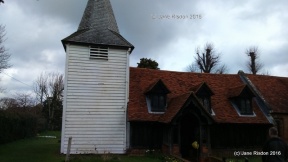 It bears witness to the work of not only Norman, Tudor and Victorian builders who variously extended, repaired and restored the building over the ages.

The name Green-sted suggested that the Saxons who first settle there found a clearing or place (stede) in the West forest of which Epping and Hainault Forests are only remnants.

The Saxon settlers worshiped their Pagan gods in ‘grooves’ in the forest and at first the East Saxons resisted attempt to convert them to Christianity by Augustine and Mellitus from Rome.

Finally St. Cedd, a Saxon trained at the Celtic monastery of Lindisfarne was successful. His base was a deserted Roman fort near Bradwell and his cathedral (now called St Peter’s-on-the-Wall) can still be seen there.

St Cedd began his work in about 654 AD and it is thought the first church at Greensted was built soon after. An Archaeological dig in 1960 revealed the impression of two simple wooded buildings under the present Chancel floor which were thought to have been built late 6th or early 7th century.

51 timber planks (still visible today) date from about 1060 AD when the Nave was added according to Dendrochronological dating of the timber. The construction methods were more advanced that those for the sanctuary which can be viewed on the sketch notes still available.

The logs had been held upright by being placed into a trench. If the dates are correct it was most likely one of the many sanctuaries used by missionaries and priests.

The nave was windowless, except for a few ‘eye’ holes (eag thyrel) and light would have come from lamps around the altar.

The opening from the sanctuary to nave was probably small and surmounted by a crucifix.

Many know the hole (on the niche by the Saxon doorway) as a Leper Squint, but archaeologists doubt this, proposing that it is more likely to have been a small window or that the ledge held a Holy water stoup in the Middle Ages. 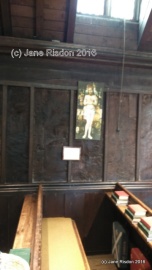 The dedication of the church to St Andrew suggests a Celtic Foundation.

In the 9th century Danish invaders became a serious threat and produced a host of Saxon martyrs, one of whom King Edmund of East Anglia is especially remembered there.

He refused to give up his Christian beliefs and was scourged, chained to a tree and shot with arrows and finally beheaded – depicted in a stained glass window in the church.

He was enshrined at Bury St Edmunds, attracting many pilgrims, and later he was moved to London for safe-keeping and eventually returned to Bury in 1013 AD.

On its way his body rested at St Andrews.

His martyrdom is depicted on a beam in the church. His head was thrown into a thicket in the forest some distance from his body.

When his followers found his head it was being guarded by a wolf hound which would not leave until the head was reunited with its body.

He later became the first Patron Saint of England but later the Normans replaced him with St. George.

William the Conqueror, having conquered the Saxons in 1066 AD set about making his mark on older churches, rebuilding them, and the flint footings of the Chancel well and Pillars piscina inside the sanctuary (basin for washing communion vessels) are all that remain of Norman work.

The coped stone coffin lid against the South wall of the Nave is thought to be the final resting place of a Crusader.

Being made of stone and not wood, suggests that he was seen as a local hero.

The oldest grave, lying adjacent to the entrance of the church, is that of a 12th century Crusader thought to be a bowman.

Henry VII’s reign was extensive alterations to the church. The Chancel was rebuilt in brick and the thatch replaced by tiles on the Chancel and Nave Roofs in about 1500 AD. Three dormer windows were added to give light to the Nave and the South porch was added.

Probably the Chancel arch was widened at the same time.

A fragment of 15th century glass can be seen at the centre of the Quatrefoil window at the West end but it was set there during Victorian restoration. 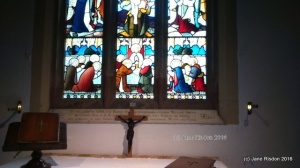 In 1848/49 the church underwent severe restoration works and in 1990 works were undertaken to stabilise the church as it stands today.

The Rector, Philip Ray recorded details of the Saxon joinery as it was investigated at the time and wrote the first account of the church. Diagrams from his book, ‘History of Greensted Church’, are shown in various brochures on sale in the church.

In 2005 the spire was completely re-shingled in Oak.

In 1987 the large Victorian font was replaced by a wooden one built of Oak using a hand adze. It was designed by Sir Hugh Casson R.A.

The earliest wall memorial is dated 1585 and is dedicated to Jone Wood.

Although the results of the dendrochronology indicates the church was constructed about 1060/1063 AD, rather than the earlier date of 845 AD, it remains the oldest wooden church in the world and the oldest wooden building still standing in Europe.

Little is known about the buildings which stood on the site before then although there have been interesting Roman finds in the area.

I discovered this interesting piece of history:

The Tolpuddle Martyrs: The six Dorset farm labourers who were taken to court on a legal technicality because they agitated for better wages and conditions by forming a Trades Union, are linked to Greensted.

After conviction in 1834 they were condemned to transportation to Australia for 7 years.

They had hard and harrowing times working in chain-gangs and being sold for £1 each.

There was a public out-cry at their treatment, in England, and a society was formed to try to obtain their release and eventually their sentences were commuted in 1837.

They were unable to return home due to opposition of Dorset farmers, but they were granted farm tenancies in Greensted and High Laver.

Whilst living in the Parish one of the men James Brine, of New House Farm (now Tudor cottage), married Elizabeth Standfield, daughter of one of his fellow victims, on 20th June 1839 and the entry is still in the present Register.

Their tenancy wasn’t renewed due to local opposition led by Philip Ray, who’d become Rector in 1837, and they emigrated to Ontario in Canada.

I loved this little church and all its history. The graveyard is pretty and the houses nearby fit so well into the landscape as does the church.

You can purchase gifts such as jars of marmalade, jam and pickles as well as booklets about the church and postcards and drawings.

Donations go to the upkeep of the church. If you are interested in visiting this delightful church here are the details. I couldn’t find a website.

The church is open daily as follows: Winter 10am-4pm and Summer 10am – 6pm

Guided tours by appointment and are free but of course a donation towards the church would be appreciated.

Guide books, Postcards, Pictures, Souvenirs, Pickles, Jams and Marmalade are on sale inside the church.  There aren’t any toilets but the village is not far and you can park in Church Lane.

I hope you enjoy this quick look around the church. Let me know.

Don’t forget there are other ‘jollies’ on my blog. Just go to the menu/blog and scroll down.

As ever all photos are (c) Jane Risdon: All rights reserved.

Thanks so much for dropping in. 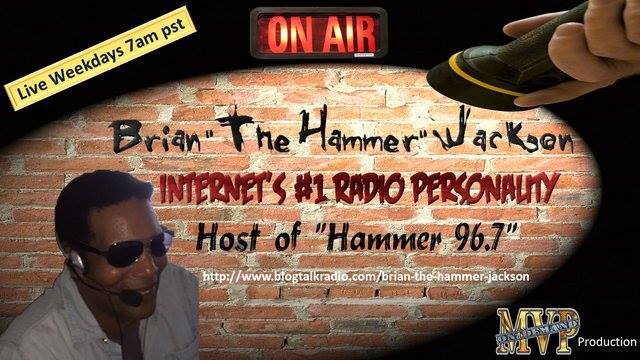 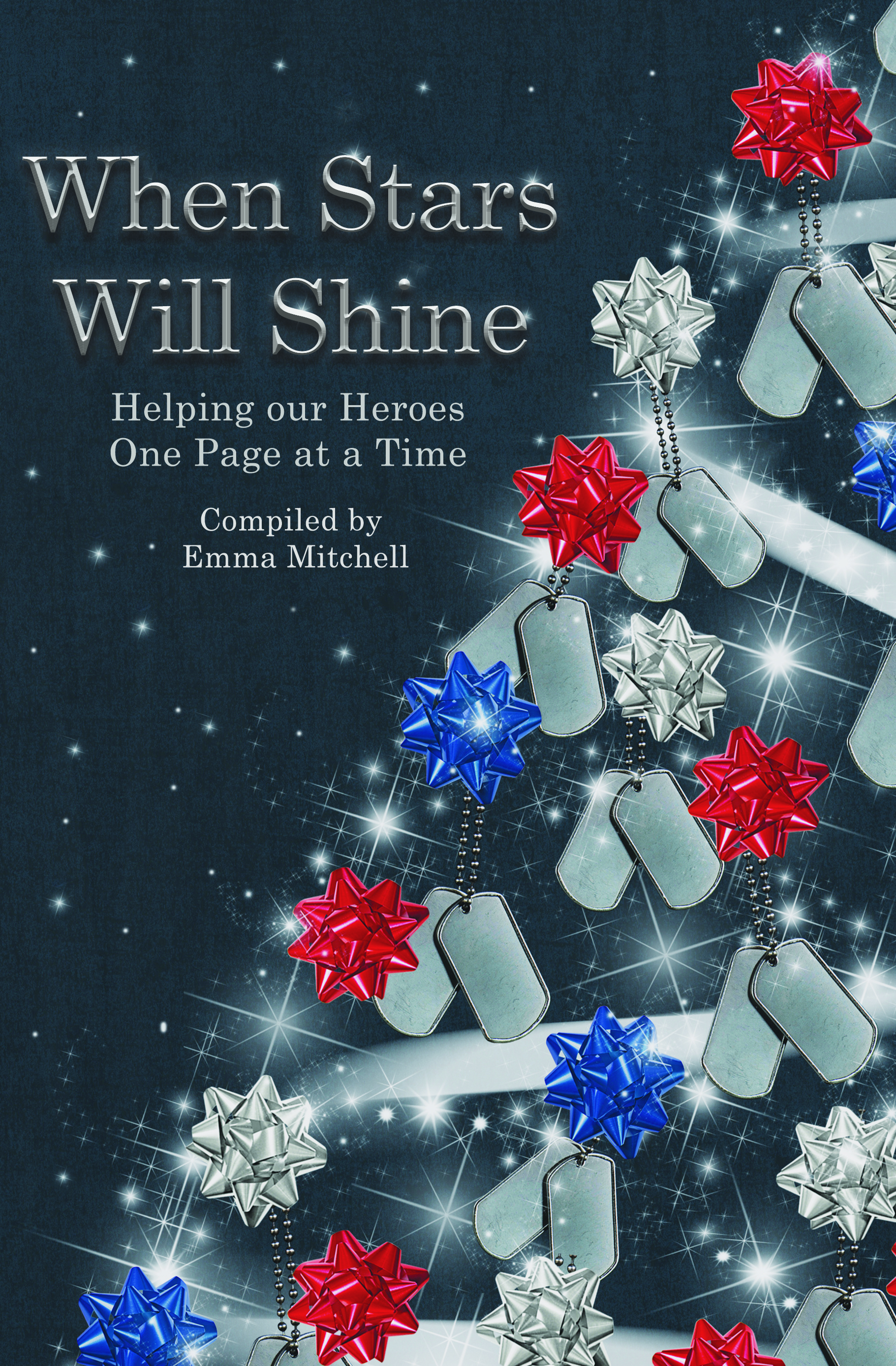