Another Jolly: the lull before the storm – Mevagissey and Fowey Cornwall. Sharing this again in 2021 because we cannot go anywhere.

Those of you who pop in here regularly know that in addition to writing related posts, I often include photos and information about my ‘jollies,’ – my trips out and about this beautiful country.

It’s been a hectic time for me of late. I needed a short break to recharge my batteries and when an old school friend invited me to stay with her, I couldn’t resist.

I will get to the ‘jolly’ in a while.

Not only have I been beavering away at Ms Birdsong Investigates (getting there, I promise) and other projects in the pipeline,

I also have the honour to be included in several anthologies of short stories.

which is a 300 page collection of some fabulous short stories by 29 authors, including yours truly.

Hardback and Paperback editions (limited). Paperback has two different covers from which to choose.

The book is in aid of Save The Children

and is published for hard and Paper back for a limited period only.

Madame Movara has been graced with a foreword by Hammer Horror Icon and former Bond girl,

My inspiration for this story, which starts on Big Bear Mountain, California, comes from a true experience in a recording studio some time back. 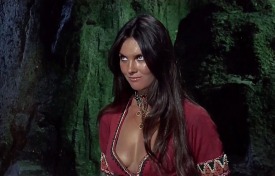 There will be Limited editions of the Hardback and Paperback copies available, illustrated throughout.

The paperback version has two different covers from which to chose.

Madam Movara’s Tales of Terror is already available via Lulu.com

Later in October one of my short stories is to be published in another anthology which is FREE.

Ghostly Writes anthology is published by Plaisted Publishing and features many fabulous stories including mine:

The Beneficiaries of Secret Cottage.

Be careful what you wish for when an unknown relation dies and bequeaths you all their world goods.

The Beneficiaries of Secret Cottage 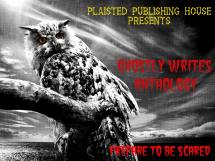 It is possible this will also be in paperback. Details as soon as I have more.

In November there’s another anthology, more in keeping with my writing as a Crime writer, which I have been included in:

A Stab in the Dark: Cons, Dames and G Men.

A Stab in the Dark: Cons, Dames and G Men

There are in excess of 16 authors contributing stories and mine is called:

Set in the 1930s of Hollywood and the Movie business.

Inspired by the death of The Mexican Spitfire, Lupe Velez with whom Elizabeth Risdon, one of my husband’s aunts, appeared in many movies.

The anthology is a tribute to The Golden Age of Detection and Film Noir.

And it is FREE and will be for Kindle. More details to follow as soon as I have them.

A Stab in the Dark anthology including my story, Cue Murder.

More details about all these publications later in the month. Do keep an eye out.

So as you can see I really needed to take a break.

Cornwall is gorgeous any time of the year.

I’ve spent many years in the county visiting friends, working and visiting many

National Trust properties and gardens. This trip I didn’t have time for such visits.

The weather was amazing considering Autumn had just started.

There was only one wet, cold, and windy day but I didn’t mind, we stayed in and nattered and caught up with all the news.

It’s been a while since we’ve been in the same country at the same time.

We had a lovely visit to Mevagissy where I used to spend a great deal of time some years ago.

I found it more crowded than it had been before, even though the ‘season’ is more or less over.

I hope you like some of the photos I took of the fishing village. 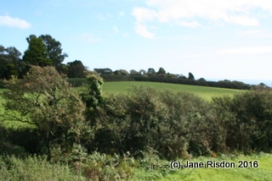 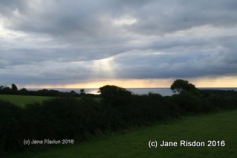 Here is the view from my bedroom window early morning with the sun playing off the sea. Magic.

To the left and right over the fields and down the cliff you can spot the sea.

The silence is endless and the sky is vast in every direction.

I recall seeing the Solar Eclipse from the same balcony in 1999 when we were staying there.

Our artist was performing at the Eclipse festival in aid of the charity, Surfers Against Sewerage.

Next we visited another famous fishing village, Fowey, famous for some many reasons including being the home of Agatha Christie.

Not far away is what was the home of Daphne Du Maurier, but this trip I didn’t get to visit Par where Menabilly (her huge home) used to be.

I was a little disappointed at both Fowey and Megavissy this visit.

Everything seemed so much more commercial and tourist-driven, which of course it has to be in this day and age. But the very quaintness, the real fishing village quality, seems to have been lost in endless tea shops, restaurants and novelty shops.

I know the fishing industry is almost non-existent and people have to make a living, don’t get me wrong. But the thing we all went there to experience, has been lost.

Because there were so many people (and dogs, dozens of dogs) everywhere it was almost impossible to take a photo without strangers in them and the number of cars up and down the ‘car-free’ streets was just too off-putting.

My friend told me that huge cruise ships come into the area just outside the harbour and boats of tourists now disembark and throng the streets most of the year.

So, not as peaceful and attractive as I remembered from my many visits and stays there in the past.

Also the popularity of the POLDARK TV series has caused an influx of fans looking for the locations of various episodes in the villages of Cornwall.

I recall the original series on BBC in the 1970s, with Robin Ellis in the role of Ross Poldark – who never had to strip to gain viewers – and it strikes me Cornwall was a bit slow back then to capitalise upon the popularity of an excellent series. I have read all of Winston Graham’s Poldark stories and I have to say I prefer the 1970s adaptation…personal taste of course.

Since the Cornish Pasty has been given a special status by the EU (European Community) bakeries have taken the utmost advantage and I nearly dropped on the spot when I checked out and compared Pasty prices from bakery to bakery.

Cornwall is still beautiful, if somewhat crowded, even off-season.

My school friend lives on a wonderful spot high about the sea and with green fields, trees and hedgerows around her and not a sound to be heard other than the birds and the cows nearby. It reminded me of how things were down there less than 10 years ago.

My next ‘jolly’ took place a few days after my return and I shall post the photos and information soon.

I hope you enjoy the photos, not as many as usual but at least a taster.

Meantime keep an eye out for the anthologies I have mentioned. Links and details follow soon. Madame Movara’s Tales of Terror can be pre-ordered at Lulu.com

http://www.lulu.com/shop/various-authors/madame-movaras-tales-of-terror/hardcover/product-22894139.html for the hardback edition

for the Scream paperback edition

for a limited period only.

Thanks for dropping in.

As usual all Cornwall photos are (c) Jane Risdon 2016 All Rights Reserved.