My Guest Author: Anna Claire Everward in her own words

She will be telling us about her in her own words:

Claire Everward (she goes by Claire) is a suspense author with a love of knowledge and a lively imagination that made writing the natural thing for her to do.

Claire is also the author of The First, and is currently working on her next book in the Oracle series with the help of her two hyperactive cats and a laptop named Stanley.

When Claire said all she wanted to do was write, her sister Kate Anne decided she would use her ten-year PR and marketing experience to help her publish. And that’s how Author & Sister was born.

Now both sisters are finally doing what they were meant to do, and they are doing it as a family.

Author & Sister is not only a newly born publishing house, it is also the sisters’ story.

Every reader, every supporter, and every aspiring writer can read about them on their blog. They can follow what it’s taking to make

the sisters’ dream come true, their breakthroughs and setbacks, the good and bad moments, the ideas and whatever interesting stories come up on the way.

The First was A. Claire Everward’s debut novel, the first in a series. A suspense novel with elements of fantasy.

Is the ancient directive that has once again reawakened in the hearts of those who hide.

Is the frantic command of those who fear their rise.

Aelia returns from a vacation that did not go quite as she expected, to a life she does not quite feel at home in but that is, at least, hers. Or so she thinks. Within days of returning she is targeted by a hit man and she has no idea why.

But then neither does he. All Kyle Rhys knows is that to protect humanity, this woman must die. At least, he thinks, killing her will be easy. After all, the organization that has raised him has prepared him for her death his entire life.

So why can’t he kill her?

In an impossible turn of events, both killer and target find themselves on the run from those who would stop at nothing to destroy them, to those who hold a truth that would overturn their entire world, taking their very identities from them forever. 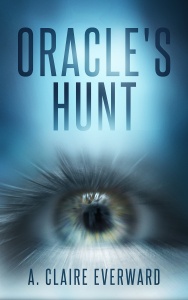 The first novel in the Oracle suspense series. Second book will be out soon (November).

A security-critical facility is destroyed to get to it and it is called Oracle.

That’s all USFID investigator Donovan Pierce knows. And while he is told to find whoever perpetrated the deadly attack, and find them fast, he is also warned not to look for Oracle itself.

Lara Holsworth never expected Oracle to be in any danger. She would like nothing more than to keep it secret and Pierce away from it—and from her, but hiding is no longer an option.

With those who now know too much more determined than ever to destroy Oracle, will its protectors’ cooperation be enough to keep it safe?

It was only one word, always the same word that lit up whenever it appeared, one word that was the target of those who had made such an effort to procure this information, destroying everything on the way.

The silence in IDSD’s dark Mission Command was increasingly deafening as the minutes ticked by. The officer who had moments earlier expressed his frustration shifted uneasily, prodding the security agent beside him to put a hand on his arm, not to calm but to silence him.

He pushed the thought away. It was easy to do that, with the practice he’d had. Focus on an investigation, find something else to think about.

Still, sleep took a while.

Thanks so much for sharing your writing and books with us Anna, it has been a pleasure. Good luck for the future.

And all rest of the Amazon bookstores