Tim Walker: Independent Author with a foot in the past is my Guest Author this week

Tim Walker is an independent author based in Windsor, UK.

His background is in marketing, journalism, editing and publications management.

Welcome Tim, I’m really happy to have you as my guest author.

I love anything to do with history so I’m really looking forward to your piece for us.

Let’s find out about Tim:

He began writing an historical series, A Light in the Dark Ages (set in the Fifth Century), in 2015, starting with a novella set at the time the Romans left Britain – Abandoned.

This was followed in 2017 with a novel – Ambrosius: Last of the Romans, 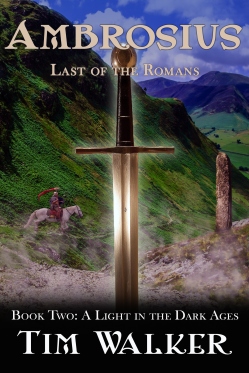 and the third installment,

Uther’s Destiny, has just been released in March 2018.

His creative writing journey began in July 2015 with the publication of a book of short stories, Thames Valley Tales.

In 2016 his first novel, a futuristic/dystopian thriller, Devil Gate Dawn was exposed on the Amazon Scout programme prior to publication.

Both titles were re-launched with revised content, new covers and in print-on-demand paperback format in December 2016.

In January 2017 his first children’s book, The Adventures of Charly Holmes, co-written with his 12-year-old daughter, Cathy, was published.

In September 2017 he published a second collection of short stories – Postcards from London. 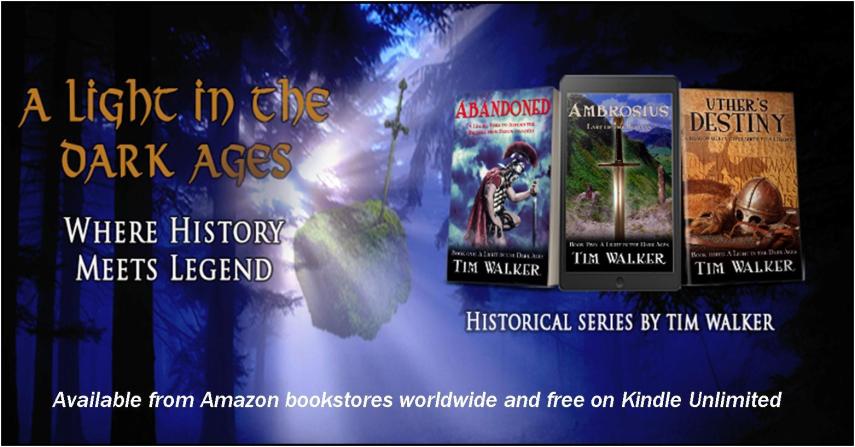 After school, Tim worked as a trainee reporter, progressing to writing a music column and reviewing films.

He obtained an honours degree in Communication Studies, majoring in film studies, and added a Post-Graduate Diploma in Marketing two years later in Bristol.

After graduating, he worked for ten years in London in the newspaper publishing industry in market research and advertising sales support.

He followed this with two years as a voluntary worker with Voluntary Services Overseas (VSO) in Zambia, working in book publishing development.  Soon after, he set up and managed his own publishing, marketing and management consultancy company.

Tim now lives near Windsor in Berkshire where he blogs and writes creative fiction.

Filling in the Gaps in Our Lost History

On a summer’s day in 2015 I stood in the grassy meadow of the site of former Roman town Calleva Atrebatum (known as Silchester in the Middle Ages) in North Hampshire, trying to imagine what it would have been like at the time the Romans evacuated between 409-410 AD. Unlike other Roman towns, this one was largely abandoned not long after the Romans left, and therefore is a green field site for archaeological excavation. The abandonment took place gradually over a few hundred years, for reasons that can only be guessed at.

It was the site of the main village of the Atrebates tribe at the time of the Roman occupation, and following a war of conquest by the legions of General Aulus Paulinius (on behalf of the Emperor Claudius) that began in 49AD, the Atrebates were in turn subdued and became a ‘client kingdom’ in the same way as the Trinovantes and Icenii had to the east. The stone walled town the Romans built was named ‘Calleva Atrebatum’ meaning ‘Wooded Place of the Atrebates’ – showing a desire by the Romans at conciliation and aimed at getting the cooperation of their new subjects.

I had read Rosemary Sutcliffe’s novel ‘The Eagle of the Ninth’ at school, and was intrigued to learn that the discovery of a bronze eagle buried in what would later be identified as the Forum in Calleva, was her inspiration. I was also interested in the Arthurian legend, and pondered the historical connection between the Romans leaving (and taking their record clerks with them) and the start of what became known as The Dark Ages – a time from which few written records have survived to tell us what happened and how the Britons organized themselves after four hundred years of living under Roman rule.

I decided to research this period and write an historical series that aimed to connect the end of Roman rule to the Arthurian legend and try to pitch it to readers as a believable alt-history. It doesn’t help that the originator of the Arthurian legend is the largely discredited Geoffrey of Monmouth, writing around 1136. His epic work, Historia Regum Britanniae – The History of the Kings of Britain – includes the first account of the Arthurian legend, apart from brief mentions of Arthur in earlier chronicles.

Geoffrey had a habit of ‘making up’ or borrowing from classical sources to fill gaps in his ‘history’ that have led historians to dismiss his work as fanciful and unreliable. However, he does acknowledge reading known source texts, most notably from monks Gildas, Nennius and Bede, and the Welsh folk chronicles and poems, plus the tantalizing possibility of lost texts that are unknown to us. It is all we have to go on, and at least suggests at an armed resistance by Briton kings and warriors to Anglo-Saxon settlement across the island – a process that took nearly two hundred years before the Anglo-Saxon kingdoms were established and the boundaries between England, Wales and Scotland were defined.

Uther’s Destiny, has just been released in March 2018.

In the year 467 AD Britannia is in shock at the murder of charismatic High King, Ambrosius Aurelianus, and looks to his brother and successor, Uther, to continue his work in leading the resistance to barbarian invaders. Uther’s destiny as a warrior king seems set until his world is turned on its head when his burning desire to possess the beautiful Ygerne leads to conflict. Could the fate of his kingdom hang in the balance as a consequence?

Court healer and schemer, Merlyn, sees an opportunity in Uther’s lustful obsession to fulfil the prophetic visions that guide him. He is encouraged on his mission by druids who align their desire for a return to ancient ways with his urge to protect the one destined to save the Britons from invaders and lead them to a time of peace and prosperity. Merlyn must use his wisdom and guile to thwart the machinations of an enemy intent on foiling his plans.

Meanwhile, Saxon chiefs Octa and Ælla have their own plans for seizing the island of Britannia and forging a new colony of Germanic tribes. Can Uther rise above his family problems and raise an army to oppose them?

Book three in A Light in the Dark Ages series, Uther’s Destiny is an historical fiction novel set in the Fifth Century – a time of myths and legends that builds to the greatest legend of all – King Arthur and his knights.

And so, I embarked on an alt-history of Britain in the Fifth Century that would fill three books, leading to the moment when Merlin unveils the youthful Arthur and proclaims him ‘A light in an age of darkness’.

Totally fascinating Tim, thanks so much.

Thanks for inviting me to be a guest on your blog Jane.

Tim, it has been a pleasure and so very interesting. Thanks so much.

We’d love to read your comments on Tim’s guest post, so do please let him know what you think.

Ambrosius: Last of the Romans – a novel – http://myBook.to/Ambrosius