Only One Woman: from 16-year-old Renza’s Diary entry for 4th November 1968

At the end of our Strasse, you can walk to the Harkortsee Reservoir which leads off along the Ruhr to the dams which were bombed in the war.

The Harkortsee is located between the towns of Hagan, Herdecke, and Wetter in the Ruhr Valley. It is one of six Ruhr reservoirs.

Although the area was known for factories and industry, it is still really beautiful. The town hall is called Das Rathaus and is really old and imposing and the Base is just down the road from there.

All the streets are cobbled, and although most of the homes are flats and in that horrid grey concrete, now and again there are some really lovely buildings, black and white, almost like those in Chester in England.

The last time Mum and I went to the NAAFI, we went to Iserlohn instead of Dortmund – the Canadian NAAFI is there, used by the Americans as well as Canadians, and they have so much more for sale than we have in ours.

I love their music section. They have records by every band imaginable, and so many I’ve never heard of before. I got another LP by The Association, and by The Beach Boys, who are so groovy and psychedelic – they’re too much.

I didn’t have that much money left from my jobs back home and so have had to be careful what I buy, but I really wanted these. Perhaps they’ll sell Narnia’s Children – I’ll need to save up in case.

We had a snack in the Stomp Club which is a sort of cafe place that sells books and magazines, and the other day I had something called a toasted cheese on rye with tomato and four types of cheese. It was lovely.

The trip to the Canadian NAAFI takes us along the Ruhr and the countryside is lovely. So much forest and so many lovely views, sweeping hills and the villages are really cute. All very Hansel and Gretel. I wished I had a camera so I could photograph it all.

If you are enjoying Renza’s diary entries, listen in to The Authors Show Channel 6 to hear an extract from her diary, and to find out more about Renza’s time in Germany in 1968/1969 and how she and Stella came to fall in love with the same musician.

This is on a 24/7 loop all day and from archives any other time.

Scroll to Archives, Jane Risdon, Only One Woman to hear this again, any time you wish.

And a great love triangle,

Discover the inspiration behind Only One Woman and how award-winning, best-selling romance author, Christina Jones, and I came to write together after years of wanting to.

After all, I write mostly crime, and she writes Bucolic Frolics.

We never thought it would work, but friends always find a way.

AvidReader 5.0 out of 5 stars Took Me Back to My Teen Years Reviewed in the United Kingdom on 4 November 2021Verified PurchaseI loved this book. Both contributors evoked such wonderful times I felt I was right back there in the 1960s. Their stories followed similar lives to my own and with the wonderful songs of that era ingrained into the storylines I felt like I was a teenager again. Beautifully well written and crafted, there was nothing not to like about this book. Thank you both.

Julie Anne 5.0 out of 5 stars A Bittersweet Trip Down Memory Lane Reviewed in the United Kingdom on 27 October 2021Verified PurchaseI really enjoyed “Only One Woman” by Jane Risdon and Christina Jones, particularly because it takes me back to the Swinging Sixties and my teenage days of bopping to the music of The Beatles, The Rolling Stones, The Bee Gees and all the other great groups of that time on the disco scene.
The book is cleverly co-written in diary form, the two central characters, Renza and Stella, each telling their stories about how they fall in love with the same guy. He’s called Scott, who happens to be drop-dead gorgeous and a guitarist in a pop group, Narnia’s Children. With both women from very different backgrounds and changes of locations, including Jersey and Germany, the story moves on apace and I found it impossible to favour either woman when it came to Scott’s ultimate choice. As the story builds, I just had to keep reading to find out. I enjoyed relating to the writers’ reminiscences of life for young women back then – from the foods we used to eat, to the fashions we wore, from family life to being at work.
Throughout the book, I found myself feeling very sorry for both storytellers, who, in effect, were being strung along by a selfish, crazy, mixed-up male struggling to make a choice between the two women in his life. But clearly, the story well illustrated the joys and pain of young romance in those bittersweet days of “free love”.
I would highly recommend this book as a trip down memory lane for women who were in their teens in the Sixties, and like me, followers of fashion, pop music, and eligible bachelors!

Thank You For Purchasing and Borrowing My Work…

International Bestselling Author and Award-Winning Inventor, Lizzie Chantree, Author of The Woman Who Felt Invisible, is my Guest Author 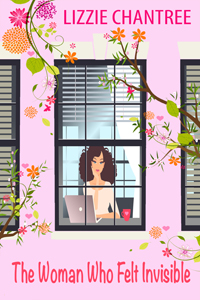 Autumn Walks in the Sunshine…

People, You’ve Got the Power Over What We Do*

Benny the Fence, and Desi Garcia’s Syncopators are Music to Her Ears…

About a Book – Undercover, Crime Shorts by Jane Risdon