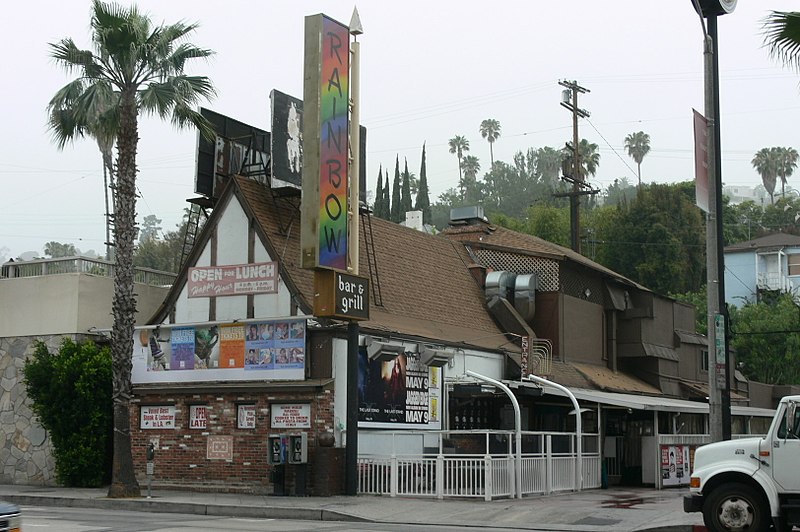 Whilst they waited for the super-star singer to conclude all the auditions and make his decision, the two musicians spent their time swimming in the hotel pool, hanging out at all the ‘in’ nightspots, and causing mayhem in general, but they weren’t alone.

The Rainbow bar and grille on Sunset Boulevard is legendary.

Anyone who is anyone hangs out there…well, back in the day they did. You were not allowed in unless you face fitted; not just any Tom, Dick, or Harriet managed to get past the bouncers.

The two musicians were no exception.

Following the auditions they wanted to let off steam, down a few bevvies, and see what talent was around; to see and be seen.

After over an hour deciding what to wear (them, not management) they set off for the trendy watering hole.

Their faces fitted. But then the management had been many times before with various artists they managed.

When they arrived they were treated to pizzas (their manager declined them, but was out-voted) and giant glasses of JD and coke (no ice please we’re British).

The drunken lead singer of a well-known Californian rock band entertained everyone by dancing on the tables as they ate, falling off now and again, getting back up on to the one next to the Brits, and then tripping over someone’s arm, only to end up face down in a pizza.

You could say his Axel came off!

A fight almost broke out, but a savvy waitress intervened and all was well; everything was Roses once more.

Another musician, the well-known drummer with a legendary British rock band, sat at a nearby table, dressed in a smart suit, collar and tie.  Management had a double take – surely not!

His band were well known for throwing TV sets out of hotel windows and driving Rollers into swimming pools, yet he seemed to be deep in a business-like discussion with another famous face who swayed back and forth as he tried to stay upright in his seat.

Across the aisle, a famous Swedish beauty cavorted with her soon to be rock star husband, completely forgetting they were not alone.  In fact, the whole bar was full of rock stars, actors, actresses, and super-star models, making life difficult for the two musicians; who was going to be the lucky girl tonight?

Further antics to follow so do come back and read more.

Photo of The Rainbow – Public Domain.

Reputation is all, or is it? How far would you go to maintain your good name?

Christmas 1968 finds Stella recovering from a life-changing operation, Renza is seething at being forgotten and Scott is cold, tired, hungry, and bewildered…